Carl Wright never set out to be a gardener. In 1996, his love of flowers, limestone landscapes, and caves drew him to The Burren in the northwestern coastal area of County Clare, Ireland. His plan was to live frugally in the run-down cottage he purchased, support himself as a tour guide, and spend his free time exploring the region’s limestone caves. His priorities were—and are—to live in a rural area with plenty of outdoor activities.

“The back door opened onto a dense thicket of blackthorn and hazel, and that was how I intended to keep it,” he remembered; however, after renovating his house, he decided he should clean up the front garden space. “I started low-key,” says Wright, “but as I got more engaged and interested, the momentum built. I started clearing more and more areas to accommodate more plants.” Next, he created a meadow along the River Caher that runs through the side of his property. Then he did clear the thicket by his back door, creating an outdoor living room.

Soon he realized he needed transitions between these spaces, so he built a wall with a perfectly round moon window that echoes the two half-circle arches of the Caher Bridge, which can be seen through the opening. Wright had never built a wall before, but he had paid close attention to the local, ancient drystone walls that define the landscape. Through trial and error, he learned the craft, using the stones he cleared from the garden.

In the past twenty years, Wright has built more than a mile of walls that define, divide, and link the garden spaces. “When I’m building the walls, I create little stone boxes inside with a discrete entrance not noticeable to people. The birds and bats nest in these spaces,” says Wright, who is committed to conservation. The leitmotif—or recurring theme—of walls makes the various garden rooms and plant collections cohesive.

Visitors enter this remarkable garden through a picket gate. The top of each picket point is shaped into a letter; together they spell welcome. A walk through the water meadow leads to the garden “living room” at the back of the house. Paths draw the visitor to the steps that lead up the hillside behind the house and into a series of garden rooms, each filled with a rich diversity of native and imported plants. The rooms include a rockery, a fernery, a hydrangea glade, and woodland areas.

Rich with the diversity of plants that The Burren can sustain, Carl Wright’s back garden is both an outdoor living room and the gateway to a series of garden spaces. 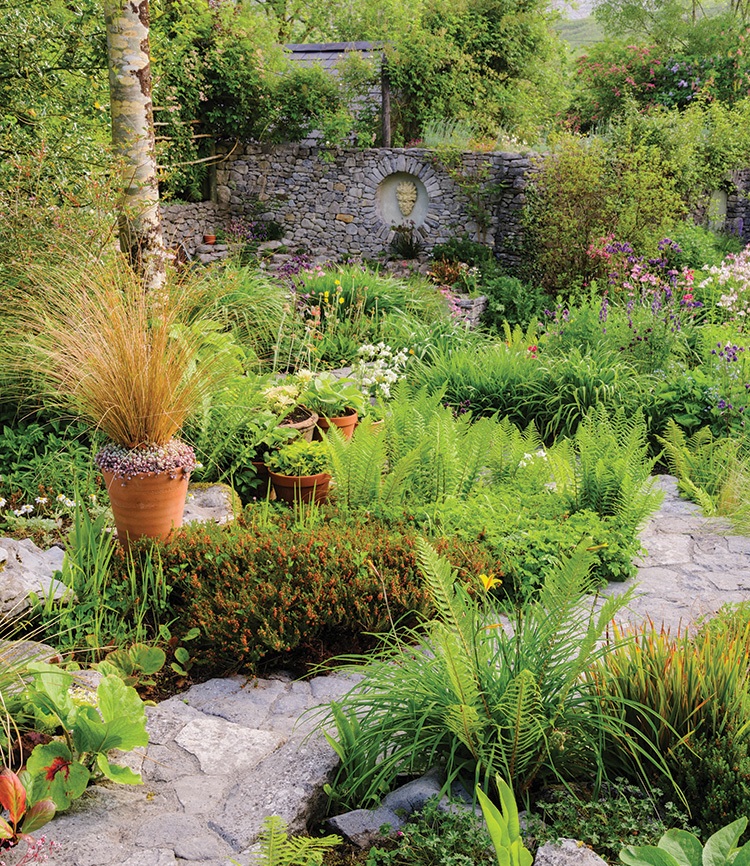 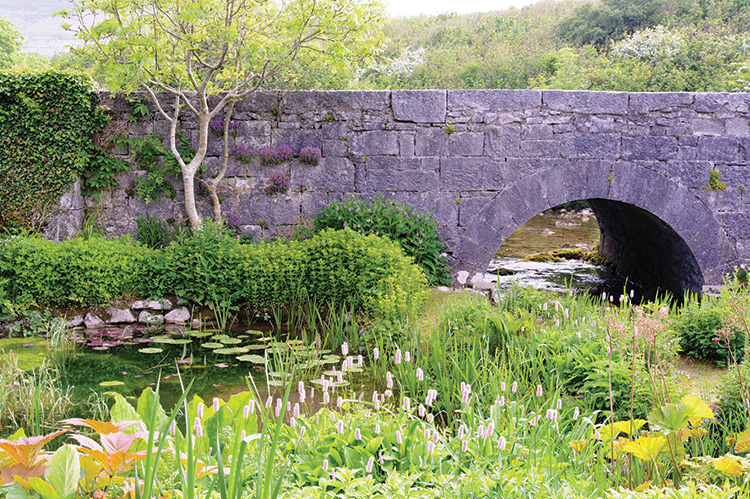 The Burren has one of the longest growing seasons in Ireland or Britain with an ample rainfall averaging sixty inches a year. It also supports one of the richest plant communities in the world, with ancient specimens hailing from locations as disparate as the Mediterranean, the Arctic, and the Iberian Peninsula. Here, plants from acidic environments, alkaline soil, mountain terrain, and the seaside all thrive. “The wildflowers here are very special,” says Wright.

In the wild, this diverse vegetation appears to grow out of stone. Indeed, there is virtually no topsoil in this glaciated karst topography. The limestone blocks that cover the land, called clints, are broken up by fissures, called grykes. Within the grykes is the soil that nourishes the plants.

In his garden, Wright built many raised beds of stone for his plant collections. He imported 1,500 tons of soil and personally sifted every ounce in his riddle to create a finer tilth and remove stones, twigs, and large lumps of clay. Although the hand of man is clearly seen, particularly near the house, Wright’s garden is in total harmony with its setting. As they progress up the hillside, the gardens meld more and more into the native landscape, blurring the lines between the wild and the tamed.