Consistently rated the best place to live in Canada, Ottawa boasts the highest standard of living in the nation, Canada’s most educated residents, and a low unemployment rate. Canada’s capital city is in the province of Ontario and is situated near the US border, close to upstate New York. Sitting on the south bank of the Ottawa River, the city center revolves around Parliament Hill and its grand Gothic Revival architecture. The parklined Rideau Canal, a UNESCO World Heritage Site, is filled with boats in summer and ice-skaters in winter.

Ottawa hosts some of the largest festivals in the world, including Canada’s largest blues festival and the world’s largest hockey tournament. Canadian culture enthusiasts will find no shortage of museums in Ottawa. The National Gallery of Canada boasts notable collections of indigenous and other Canadian art, including the memorably colossal bronze spider sculpture, Maman. The Canadian Museum of History showcases exhibits around Canadian heritage, and the Canadian War Museum features Canadian military history exhibits. The Canadian Museum of Nature is yet another recently expanded cultural destination for visitors and locals alike.

Parliament Hill is a must for both architecture and political buffs. It consists of three Gothic Revival-style buildings on a 170-foot bluff overlooking the Ottawa River, and houses the offices of the Parliament, House of Commons, and Senate. Take a free guided tour and explore Canadian history and the workings of the political system, and add a tour of Peace Tower for more history plus gorgeous views from the top. Don’t miss the changing of the guard! Stroll the scenic Rideau Canal, one of the oldest landmarks in Ottawa, and take a riverboat cruise along the Ottawa River. The Canadian Tulip Festival celebrates spring in the month of May with over 1 million displays of tulips planted throughout Ottawa. Pedal through gardens blooming with more than 300,000 tulips on a two-hour guided bike tour bursting with color. 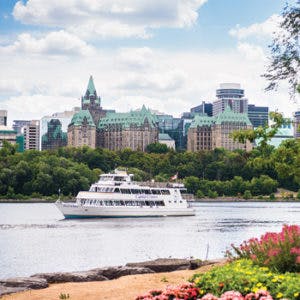 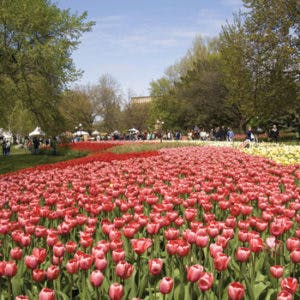 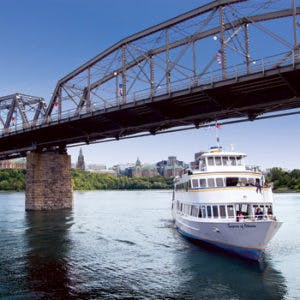 For a whimsical meal in ByWard Market, a neighborhood featuring its own farmers’ market, head to Play Food & Wine for an array of delectable small plates. Sample gnocchi with spinach and mushrooms, hanger steak with frites and aioli, and pork belly with pickled sauerkraut, each expertly paired with staff recommended wines by the glass. Oyster lovers should not miss a visit to The Whalesbone Oyster House near the Canadian Museum of Nature. Dive into oysters from both coasts along with seductive seafood dishes like lobster risotto and a sublime clam chowder, all while engaging with the friendly bartenders and oyster shuckers. Don’t miss lunch at La Bottega Nicastro, an Italian market and local favorite, offering olive oils, chocolates, cheeses, and coffee for purchase. Head to the café in the back for a sit-down lunch featuring sandwiches, pizzas, salads, and desserts; definitely order a sandwich of heaping portions of prosciutto on focaccia with options like buffalo mozzarella, spicy marinated eggplant, and roasted red peppers.

The Albert at Bay Suite Hotel will provide a home away from home for the whole family during longer stays, offering spacious suites with full kitchens and underground parking, and is within walking distance to all of the attractions of the city center. For modern lodging in ByWard Market, stay at the Andaz Ottawa ByWard Market, where you’ll receive a complimentary glass of wine at check-in. Enjoy it on the rooftop lounge along with sweeping views of downtown. For deluxe accommodations near all the sites, the luxury of the Fairmont Château Laurier cannot be beat. Steeped in history and highly regarded across the country, this gothic piece of architecture will surround you in breathtaking beauty. Opt for the Fairmont Gold level as it is well worth the upgrade.

Ottawa is easy to reach by train, plane, or automobile any time of year; just a two-hour drive from Montreal and approximately four-and-a-half hours from Toronto. The Ottawa Macdonald-Cartier International Airport is just twenty minutes from downtown Ottawa, so getting here for the spring festivals—whether they be visual explosions of tulips or audio bursts of jazz music—will be a snap.

May 11 to 21: Canadian Tulip Festival

May 26 and 27: Tamarack Ottawa Race Weekend

May 31 to June 2: Gatineau Beerfest