It’s not every busy architecture firm that would delight in fielding calls about tumbledown structures, but JLF Architects isn’t your typical enterprise. “Our philosophy is making contemporary spaces with reclaimed materials— the parts and pieces of old buildings,” says firm partner Paul Bertelli, who notes that they occasionally drive around the country searching for old, neglected—and stunning—architecture, often in areas where the air is dry enough that logs are perfectly preserved. “As architects, we identify as critical regionalists, which essentially implies that all of our work identifies with the place. Anything we build, you would be able to say, ‘Oh that belongs in Pennsylvania,’ or ‘That’s Northern California.’” 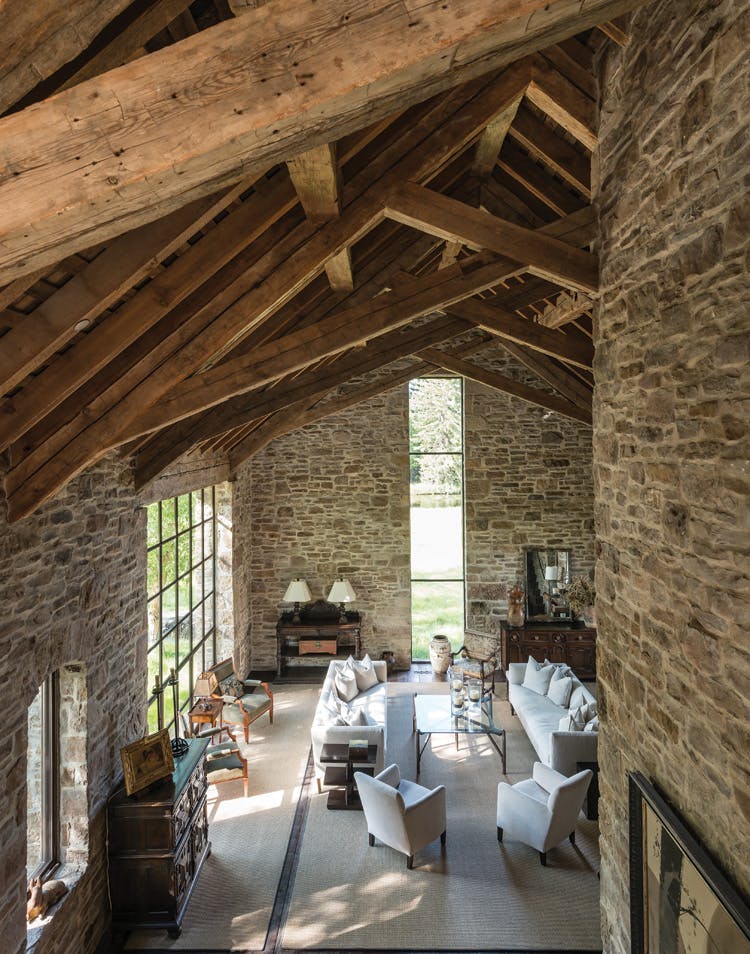 Or the Wild West. When one of JLF’s masonry suppliers phoned their office one day to say he’d come across a roofless limestone dairy barn in an uninhabited agricultural community in far north Montana, they knew it was something special. “I saw the picture he took of it and said ‘don’t show it to anybody else!’” recalls Bertelli. “We flew up to Great Falls, got in a pickup truck, bounced around fields for thirty miles, and there it was, in the middle of nowhere in a cow pasture.”

All the legwork was well worth it, because, as the saying goes, they just don’t build them like they used to. This particular dairy barn was hewn of local stone in the 1880s and 1890s by a German Hutterite community. Bertelli says the residents likely immigrated to Canada and then down into the United States fleeing persecution, where they created their own self-supporting world, much like the Amish or Mennonites. “These were some very skilled masons, unbelievable,” says Bertelli, pointing to the hand-chiseled corners, window openings, and finished planes in the original dairy barn. “It’s rare to see something of that quality. We’re a very young country. You go to Europe and that stuff is ubiquitous, so we are very lucky to have something on our soil that really represents eighteenth-century architecture.” 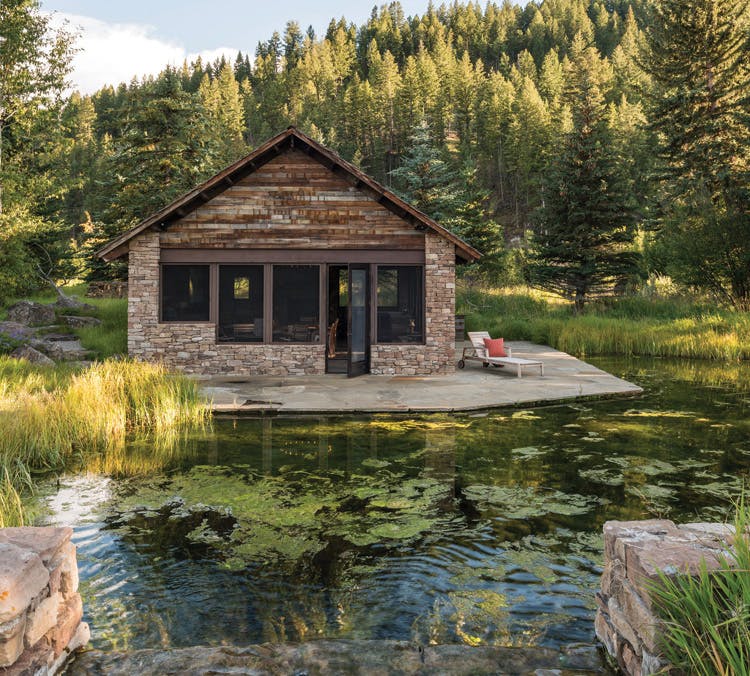 The entire team at JLF Architects knew they had to have it; they called a client they’d been working with for seventeen years and convinced her to help them buy it. “She’s an antique collector, and we thought this could be the ultimate antique,” says Bertelli. The client too fell instantly, head-over-heels in love. The trouble was, where would they put it? It couldn’t stay on its current Montana plot, where cows were using it as a scratching post. They eventually moved the entire barn, stone by stone, rebuilding it nearly exactly the same way on a spot the client and her son purchased for it. The new location, just outside Jackson, Wyoming, features the mountains of the Teton Range rising like a postcard sprung to life in the distance. “I’m guessing it was about 30,000 pieces of stone, and at least a third of them we labeled so we’d know where to put them back,” says Bertelli. It was no easy feat, according to JLF Architects partner Logan Leachman. “The masons we worked with were probably feeling like, ‘Jeez, I could go work somewhere else for a lot less stress!’ It’s a testament to the team of people that got it back together.”

Now the antique has been remade into a modern 7,919-square-foot home with decidedly twenty-first-century technology, yet reclaimed-fir floors, steel windows, original limestone, and a long glass-walled hallway bring the outside in. The home’s interiors are filled with timeless, neutral pieces—Chippendale chairs, a French refectory table—that while beautiful, keep the spotlight on the natural stone and the cinematic natural beauty beyond the windows. Only the fireplace hearths detract the eye from the lush fields and snowcapped mountains beyond. “We oriented the tall slice in the gable so that when you stand in the hallway and look out the window, you see the Grand Teton,” says Bertelli. “We didn’t make it this huge, big, grand window; we wanted to create a more interesting form.”

One of Bertelli’s favorite things about the building? How little they did to it. “You’re looking across a beautiful field of grass and all you see is the little stone building, and the nature formed the frame,” recalls Bertelli. “Normally, someone would come to us and say, ‘I own a piece of ground and want to build a house.’ This project was inspired by the simplicity of the building, and then we found the right piece of property. It may never happen again. It took such courage for the owner to show such restraint and respect for the original form. It was faith and love of the process that drove us to something like this, and it’s probably the most extraordinary building we’ve ever done.” 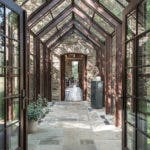 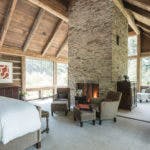 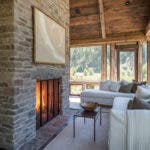 ABOVE, FROM LEFT: A connecting hall made of steel, glass, and reclaimed Yorkshire stone paving provides an effervescent entrance into the home. The master bedroom is complete with two fireside seating areas. 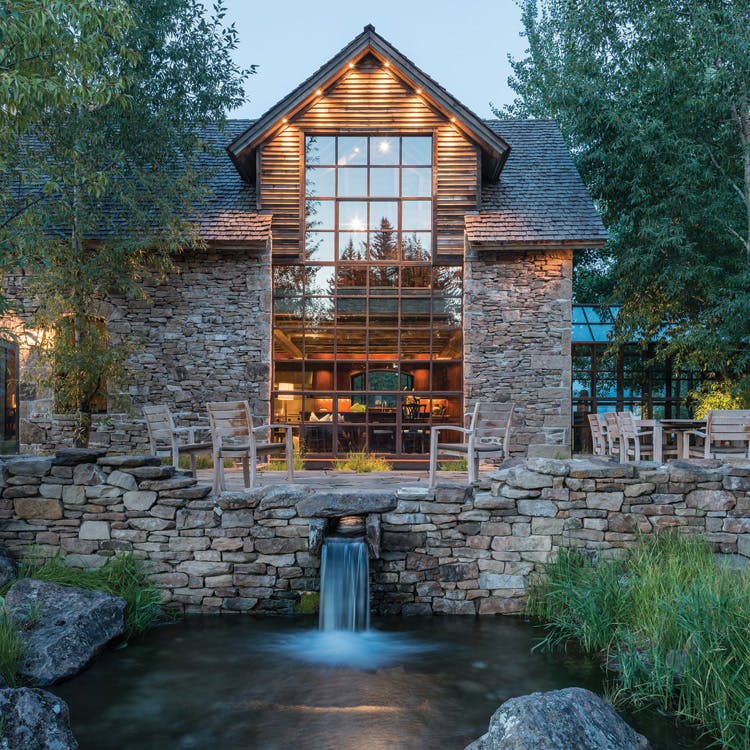 Article by home by design. 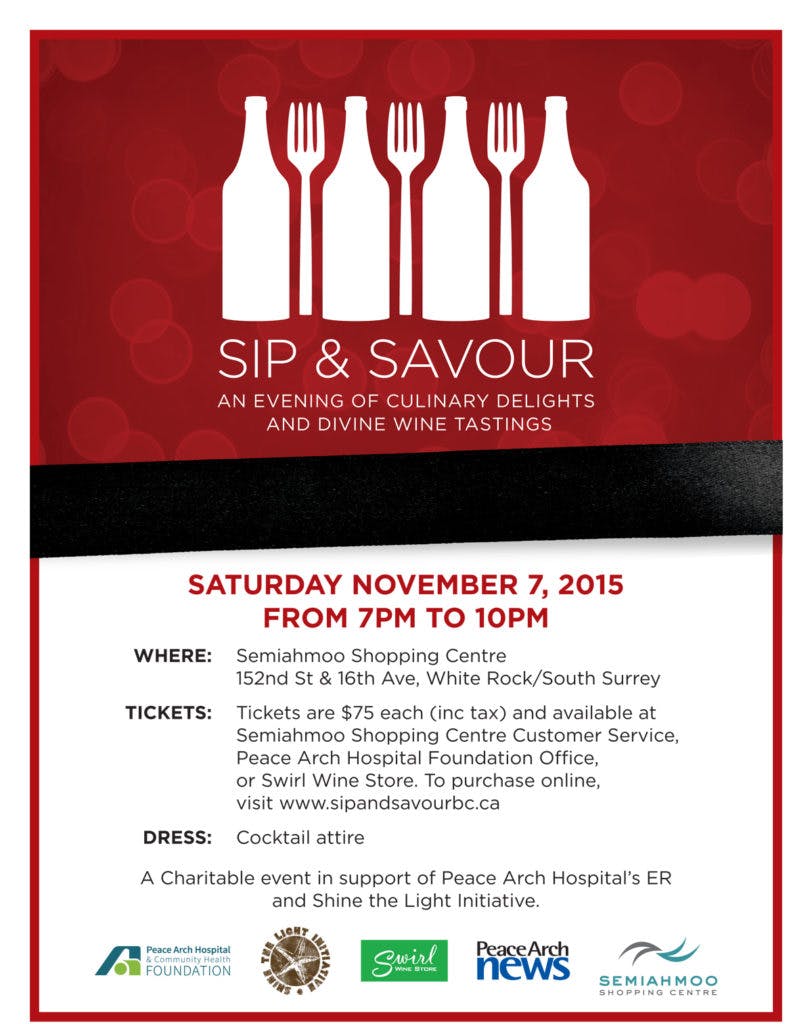 It’s the newest trend in insect travel. Everyday people are becoming bee hoteliers by setting up nesting sites, called bee hotels, to attract a variety of the pollinators. The targeted guests are the various genera and species of small, nonaggressive mason and leafcutter bees.

Known as tunnel-nesting bees, they look for dry tunnels in which to lay eggs, seeking out hollow plant stems, abandoned borer-beetle holes, and similar spots. Both mason and leafcutter bees lay their eggs in existing holes, and do not damage structures to make their nests. Both genera also stay close to home, foraging for pollen and nectar within 300 feet of the nest.

Unlike honeybees that live communally in hives, these mild-mannered bees that rarely sting are solitary, going about their business of preparing for the next generation without social interaction. But they like nesting near other members of their species; thus the bee hotel, which is simply a collection of hollow materials mounted in a frame and covered by a roof to keep out the rain. These dwellings provide a dry environment that mimics the conditions the bees prefer. There is a wide selection of bee hotels available for purchase, but it also is easy and inexpensive to make your own. END_OF_DOCUMENT_TOKEN_TO_BE_REPLACED