Trading the rushed pace of urban living for views of sailboats and sounds of waves is what many city-dwellers long for in a summer vacation, but few take the leap to make it a fulltime lifestyle. Megan Dixon had been an urbanite all her life—working in Boston, London, and San Francisco as an international lawyer—but it was ultimately the call of the water that persuaded her to leave her city roots behind. After joking to a friend that the only way she’d move to Marin, a suburb just north of San Francisco, would be if she lived on a houseboat, Megan and her friend drove to nearby Sausalito to view a three-story floating home up for sale. The trip began as a lark, but when Megan stepped off the dock and onto the houseboat she was sold. 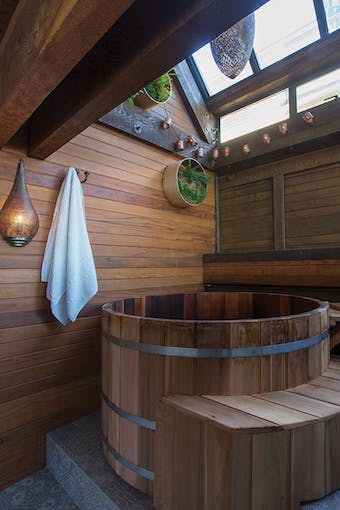 The new owner soon discovered that renovating a houseboat, particularly one that’s over thirty years old, comes with its own set of challenges. She spent the next eight years working to make the 1,500-square-foot home watertight—no small feat for a wooden structure sitting in water. Fast-forward to post renovation and Megan was ready to focus her attention on the interiors. She hired San Francisco-based design firm LOCZIdesign to help. “When Megan and I originally met, we liked each other immediately,” says Paige Loczi, the company’s founder and creative director. “I could see from her art and collections from travel that we would have a lot of fun working together.”

For the next seven months, Paige and LOCZIdesign senior designer Catrina Cooper worked with DuGarry Construction to completely revamp the houseboat while Megan temporarily relocated to dry land.The renovation included removing walls, remodeling the kitchen and bathrooms, adding a master closet, and creating an indoor-outdoor spa; all with a goal of improving the layout and creating a colorful, internationally inspired home that would reflect her diverse travels. Construction posed some houseboat-specific challenges including calculating weight distribution and hauling construction materials in and out by hand.

Having a client who was willing to go bold and experiment with rich colors and big patterns allowed the LOCZIdesign team to push the boundaries for many areas of the houseboat’s interiors, including the kitchen and living room on the upper level. In the kitchen, Catrina proposed pairing Trove wallpaper featuring portraits of famous historical queens with a dark, geometric porcelain tile from Global Tile Design. “We’ve wanted to use this paper forever,” shares Catrina. “Megan was totally willing to go for it, even in this unconventional location.” Dura Supreme Cabinets in Graphite complement the wallpaper. 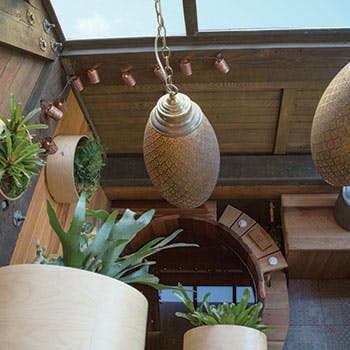 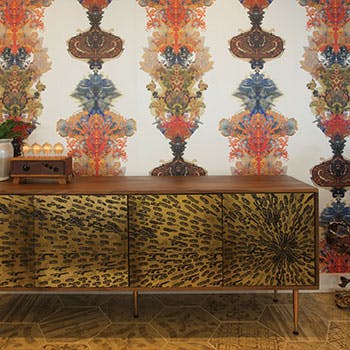 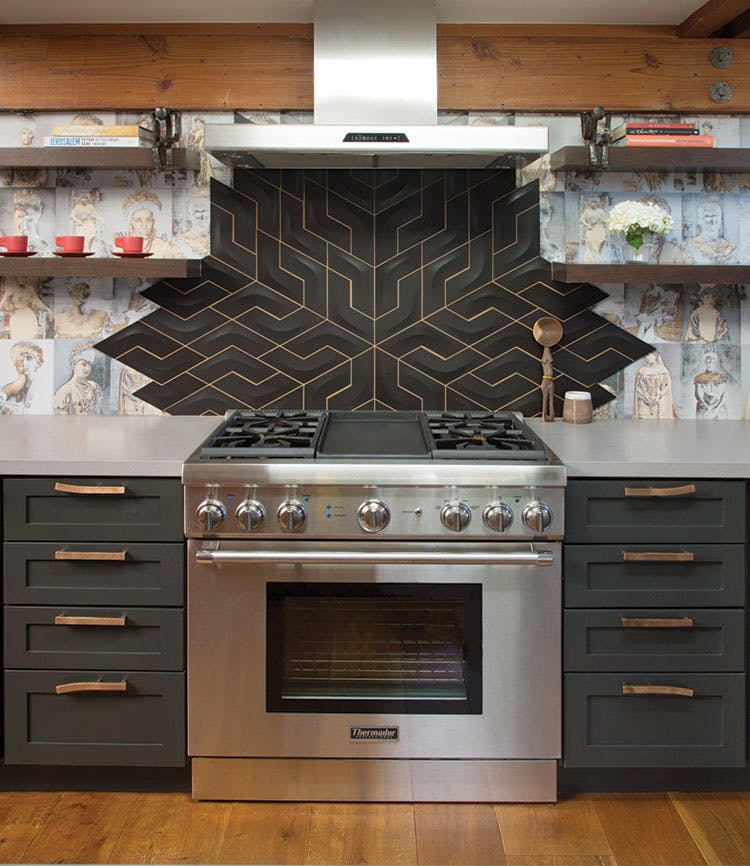 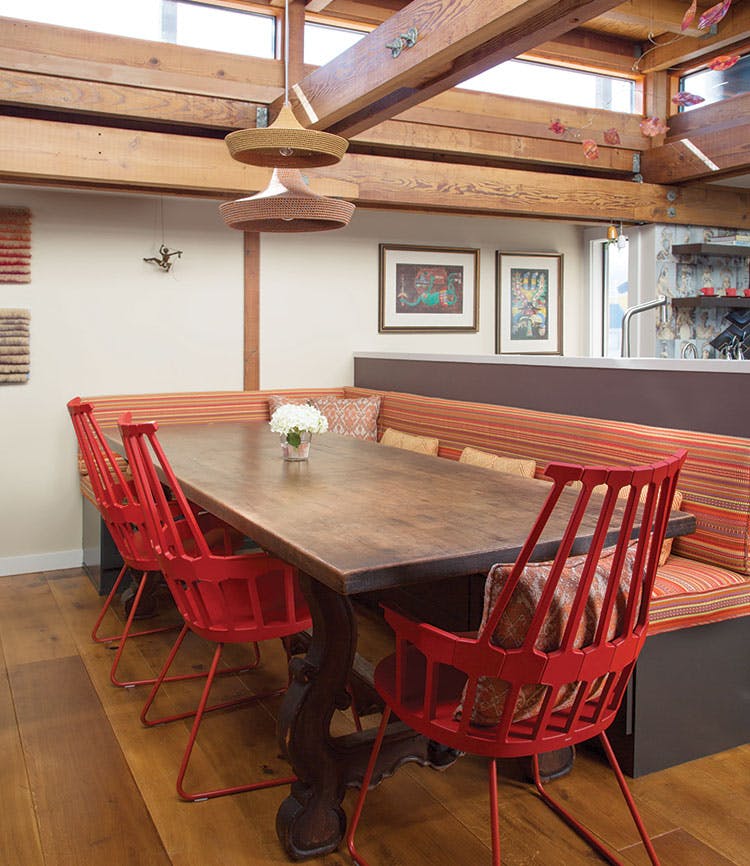 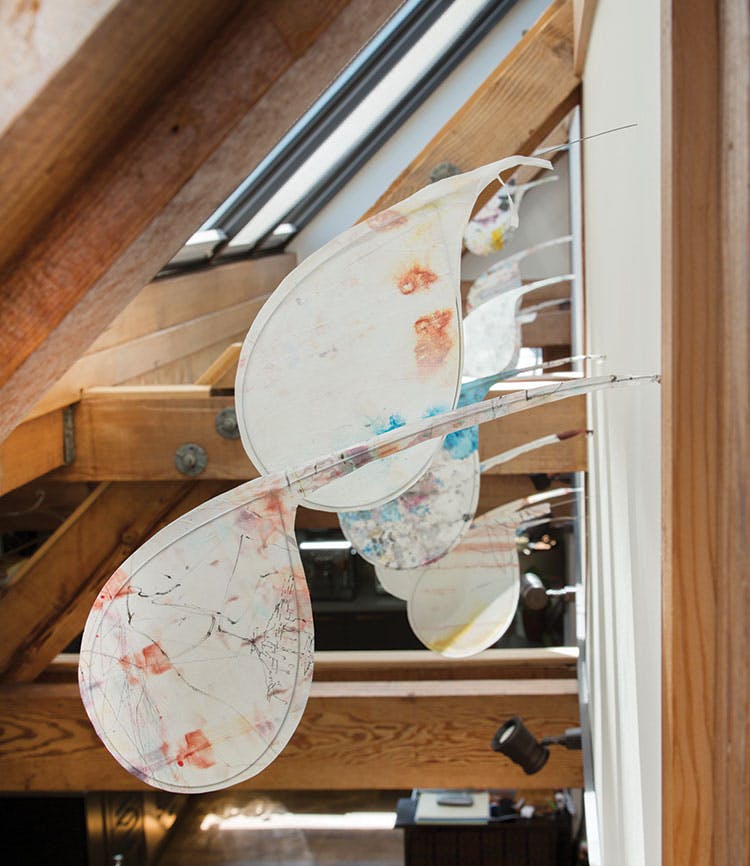 By the time the design team had finished with the remodel, Megan had been away from her houseboat for just over half a year—a conscious decision to allow for a big reveal at the end of the project. “The experience of Megan seeing her home completed was truly priceless,” shares Paige, passing on that they captured Megan’s reaction on video. After stepping off the dock and onto the houseboat, just as she did nearly ten years ago, Megan was completely swept away. “I knew you’d do a good job,” she said at the reveal, “but you’ve exceeded my even wildest expectations!” 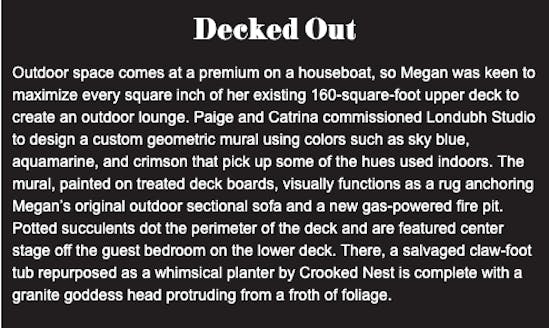 In the living room, the bold Roche Bobois Mah Jong sectional was a splurge, but it had been on Megan’s wish list since day one. Paige and Catrina selected a mix of prints to match the color palette for the home and set an eclectic, boho-chic theme for the living space. A wall-mounted fireplace from Sweden was a houseboat work-around to a traditional hearth-and-mantel setup.

Downstairs, the master bedroom sits more than half-submerged beneath the water with a ring of basement-style windows to let in natural light. To make the space feel as bright as possible, the team eliminated a wall to a former office and stuck to an airy color scheme with off-white, warm wood, gold accents, and splashes of color. On the wall opposite the bed, another bold wallpaper—Grand Blotch Damask by Timorous Beasties—is displayed behind a riveted gold credenza from White on White. The wallpaper brings up fond memories for Megan, whose former London flat was just a stone’s throw from the Timorous Beasties showroom.