A Colorful Collaboration for a San Francisco Family

Katie McCaffrey was excited. When she and her business and design partner, Martha Angus, were interviewing with clients for a potential project, the duo learned that their good friend and colleague, architect Andrew Mann, would be heading up the home’s renovation. “We were over the moon when we learned Andrew would be a part of this project,” says McCaffrey. “We just work so well together and know each other’s styles so well.” 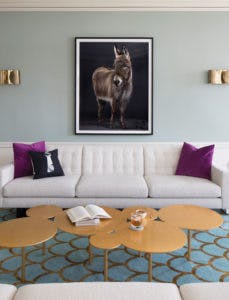 Luckily, McCaffrey and Angus of Angus McCaffrey Interior Design, Inc., landed the job and soon began their collaboration with Mann and the homeowners on the renovation of their traditional, 4,000-square-foot, San Francisco home. Mann previously worked with the clients on the renovation of the top floor of their three-story home, which houses the master suite and their three kids’ bedrooms. The goal with phase one was to maintain the integrity of the home’s traditional architectural details but inject more natural light and clean, modern lines and finishes to the space. “That meant being creative with skylights,” explains Mann, who added one in the master bath and master closet. “It creates a glow whether it’s sunny or foggy outside.”

When it came to phase two, which involved gutting and renovating the basement, Mann, Angus, and McCaffrey faced a similar but slightly more difficult challenge: significant lack of natural light. “We had to find clever ways to make a space that has little to no sunlight feel illuminated,” says Mann, who added additional windows and uplighting along the perimeter of the ceiling. It was then up to McCaffrey and Angus to finish the space with their design touch. “There was this desire to bring in some modern and some pop of fun that reflected the clients’ modern sensibilities but really tie it in to the traditional envelope of the home,” says the designer. McCaffrey and Angus kept the walls of the home simple and white and added pops of color via accessories. Enter basement details such as the tufted gray sofa by Restoration Hardware, the bold purple chairs by All Modern, and bright-orange custom throw pillows designed with Riitta Herwitz Design Support.

On the main level, McCaffrey took advantage of the homeowners’ love for modern art and used it as the driving inspiration for much of the home’s aesthetic. “They have a fantastic, gutsy taste in art,” says McCaffrey. “They’re willing to take chances with their artwork and I loved that.” In the kitchen, for example, a neon sign by artist Tim Etchells sets the tone for the gathering space. “That artwork is so fun that I wanted the furniture and accessories to reflect that,” she says. Metal stools in a bright-yellow from Room & Board complement the yellow chevron Roman shades in the breakfast area, while a tulip table by Eero Saarinen and Eames dining chairs keep it modern and fresh. 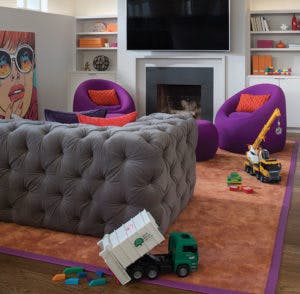 McCaffrey and Angus took a similar approach in the living room where they mixed traditional pieces with contemporary furniture and accessories. “We have this beautiful, custom-designed coffee table by Lion’s Eye Group in there as well as custom built-ins, which kept that space slightly traditional,” says McCaffrey. “But then we made it a touch more modern with a rug with a dragon scale pattern and a beautiful, custom white sofa with a sleek body.” Mann designed the built-in cabinetry and fireplace mantel, both of which skew on the traditional side. “We wanted to clean up the lines a little bit in this room, but not go too modern,” says McCaffrey.

In keeping with the traditional-meets-modern aesthetic, McCaffrey and Angus wanted to inject humor into the powder room via a funky toile wallpaper. “Toile is a very traditional pattern, but this particular pattern is very untraditional in that it features images of Brooklyn with subways and drawings of late rapper Notorious B.I.G.,” says McCaffrey. “The homeowners are very cheeky and wanted to play homage to the home with this traditional toile but in a more modern, fun way.” 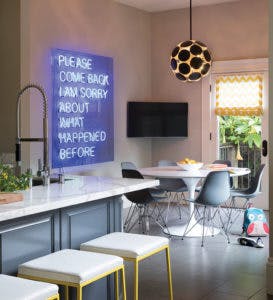 The playful, modern approach extended beyond the living spaces and into their youngest son’s bedroom. “We showed the clients a lot of pattern,” says McCaffrey. “So we figured, why not play with the pattern in Kingston’s room?” There, McCaffrey used a simple, traditional, navy-blue metal bed frame from Serena & Lily as the base, but then added a fun polka dot rug and a Quadrille by Alan Campbell wallpaper in a bright, bold yellow. “It’s the perfect combination of traditional and modern.”

After months of collaboration and installation, Mann, Angus, and McCaffrey feel that the end result is a true reflection of the homeowners and their family. “We really created a place for their kids and family as a whole, but also brought a level of sophistication to the space,” says Mann. “The home really captures this playful family’s personalities.”