When Kelly Rivelo purchased her Seattle home, the once-loved garden had been neglected for nearly twenty years. Brick retaining walls and steps built in the 1930s by Dorothy Metheny, the original owner, were crumbling, and the eighty-year-old garden was completely overgrown. “You couldn’t see the view of Elliott Bay in Puget Sound, and the garden was dark and icky,” says Rivelo.

An avid gardener who isn’t afraid to get dirt beneath her fingernails, Rivelo wanted to clean up the mess but also keep the original garden’s feel. She interviewed several landscape architects, but no one “got it”—that is until she met Kim Rooney. The synergy between the two women was instant. Rooney agreed that the old walls and stairs should be kept, and she embraced Rivelo’s vision for the garden.

“When we first met, Kelly mentioned Gertrude Jekyll as the source of inspiration for her garden. That resonated for me,” says Rooney. Gertrude Jekyll, who designed gardens in the late-nineteenth and early-twentieth century, was strongly influenced by the uninhibited profusion of plants found in old cottage gardens. She also recognized the necessity of providing an underlying architectural structure as a framework to the floral abandon. This structure took the form of paths, hedges, walls, and other features. 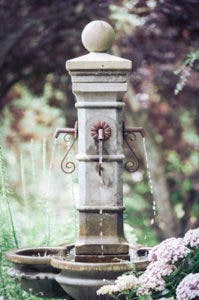 Jekyll also was a painter, and her understanding of color and composition as well as her deep knowledge of plants enabled her to create complex, masterful combinations. This is the design aesthetic that inspired Rivelo and Rooney as they developed the plans for restoring and renewing the overgrown garden. “Like Jekyll, my mother was a painter,” says Rooney. “Every garden I do is strongly influenced by her teaching me about layering color on canvas.”

Rooney’s first challenge was to tackle the plunging slope, which drops twenty-two feet from the house to the road below. Taking a cue from Metheny, she opted to keep the terraced tiers that lead down the hillside, turning the levels into a series of garden rooms, each with different functions. The “fire room” features a fire pit with an arc of comfortable chairs. The “dining room” is furnished with a long table and chairs, and at the lowest level, the rose garden is filled with fragrant English roses. “Kelly was an unusual client,” says Rooney. “She has created gardens before and knows more about plants than most of the people I work with. She came to me with a list of plants she wanted in the garden, including English roses for their fragrance and traditional cottage garden plants such as foxgloves, Japanese anemone, lady’s mantle, lavender, and lilacs.”

Once the intricate hardscape and planting plans were on paper, work began. Most of the overgrown plants were removed, revealing the structure of retaining walls and stairs. Wherever possible, Rooney had the decaying brickwork repaired. Where it was too far gone, she replaced it with stone, which provides a harmonious, naturalistic look. Pea gravel paths wend through the level terraces, providing a comfortable, pleasing journey throughout the garden. 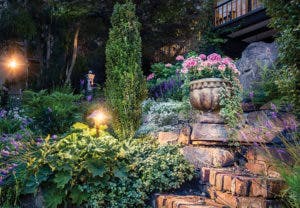 Then the planting began. Channeling Jekyll, Rooney layered plants, creating multiseasonal interest of color and texture. “Kelly understood that a garden like this can look a little wild,” says Rooney, “but she was okay with that.” Rooney employed structure with shrubs and trees to give a sense of containment. A boxwood hedge surrounds the rose garden.

As a result of the careful planning, the garden sequences through a series of floral displays. Spring flowering bulbs are succeeded with summer plants that give way to fall blooming perennials such as Japanese anemone. Flowering trees and shrubs add to the bountiful arrangement. In winter, Japanese maples and camellias salvaged from Metheny’s original garden come into their own, with the dramatic branching typical of the Asian maples and the camellia’s winter bloom.

This is not a low-maintenance garden, but that is as Rivelo wishes. “I spend about thirty hours a week working in the garden,” she says. “There is very little bare dirt, every pocket is planted. It’s a pesticide-free garden so it attracts a lot of wildlife, birds, pollinators, and honeybees. I love it, and working in the garden makes me a better person.”