When you think of Colombia, the first few items that might come to mind are Juan Valdez and coffee, Pablo Escobar and Narcos on Netflix, and your vague memory of high school history and the Spanish quest for gold in the Americas; however, the true richness and jewels of Colombia are on its Northern Caribbean Coast. Not only are the beaches tranquil, but the culture radiates a warmth too—a natural alegría (happiness). From its welcoming colonial streets and music to the beauty of its mountains and national parks, the riches of Colombia await.

CARTAGENA
The bougainvillea-draped colonial homes and cobblestoned streets of Cartagena will seduce you. Nothing beats a stroll through the Old City and its Spanish plazas and city walls, taking time to sit and watch the world go by at inviting cafés and watering holes. A wonderful afternoon visit is wandering the tunnels and secret passageways of Castillo de San Felipe, which is the largest Spanish fort in the New World. For a more modern, hip taste of Cartagena, take a cab to Bocagrande or Plaza de la Trinidad in the Getsemaní neighborhood for cocktails or a tinto (coffee). Many say that Cartagena is un poco Cuban, as there are many similarities from the popular four-pocket shirts and cigars to refreshing rum cocktails. Cartagena’s romantic combination of past and present makes it the perfect backdrop for a couples’ getaway or a great storyline for a budding writer.

BARRANQUILLA
For most Colombians, Barranquilla is all about music and Carnaval. Once a year, four days prior to Ash Wednesday (usually in February or March), the city becomes a party with a constant parade of costumed musical groups dancing and singing in hopes of winning the Conga del Oro (Golden Conga). Although Brazil’s carnival in Rio de Janeiro is still the largest in the world, Barranquilla is the second largest and it has been designated a Masterpiece of the Oral and Intangible Heritage of Humanity by UNESCO. If you don’t want to battle the crowds during Carnaval, you can still catch the essence of the festival year-round in the cafés and discos with Cumbia, a mix of indigenous, African, and Spanish musical styles. 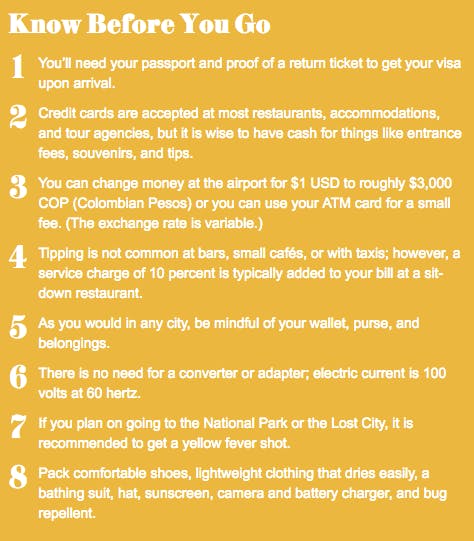 SANTA MARTA
Santa Marta was the first settlement by the Spanish in colonial times; thus, this seaside town has a charming historic district, but it also has excellent restaurants and a range of accommodations. Because of its strategic location, the city is considered the gateway to the beautiful Sierra Nevada de Santa Marta mountains, which are home to Ciudad Perdida (The Lost City), Colombia’s version of Machu Picchu, and the spectacular Parque Nacional Natural Tayrona (National Park of Tayrona). The trek to the Lost City is remarkable, but it can take three to four days of guided hiking and rustic accommodations. If you would like to immerse yourself in nature as well as witness ruins, but only for a short hike, El Pueblito (Little Town) is a one-hour trip from Santa Marta in the National Park of Tayrona. Be sure to pack your swimsuit for Tayrona. Its beaches, especially La Piscina (The Pool), are spectacular and not to be missed.

Whether you love architecture, music, nature, or a bit of it all, Colombia’s Caribbean Coast is an unforgettable experience. Discover its riches for yourself. Buen viaje (have a good trip)!