For a traditional brick-and-stone house in Flower Mound, Texas that was due for a major update, innovative interior designer Ginger Curtis was happy to save the day. Working primarily with the wife on the master bedroom renovation, she let her client be her guide. “She wanted it to feel bright but warm,” says Curtis, president of Urbanology Designs in North Richland Hills, a suburb of Fort Worth. “The walls were a very deep beige, like the carpet, so there was no contrast or brightness.”

Now the room has plenty of both. “There’s a contrast of rustic and hard with soft purple and soft touches of elegance like the bench with tufting,” says the designer, whose rustic contemporary description of the master suite fits the bill for both husband and wife. “When you’re leaning toward modern, it starts to feel cold. But rustic instantly adds warmth to everything.”

Curtis has become close with her clients and also worked on other areas of the home. The designer says she has a great deal of respect for the wife after collaborating on this project that included the removal of carpet, installation of wood floors and roman shades, and new paint. “I was so impressed by how much she honored her husband during the process,” she says. “She was so considerate. She has a beautiful heart and she’s a wonderful person.”

The end result was a win-win for the couple. “He gets this really cool rustic headboard feature and she gets her purple pillows,” says Curtis. The wood accent wall/headboard made from knotty alder provides the perfect contrast against the soothing taupe-gray walls, while a custom bed is flanked by custom nightstands that are attached to the accent wall. “The upholstered headboard adds extra comfort. I love that upholstered bed balanced against all the wood,” she adds. 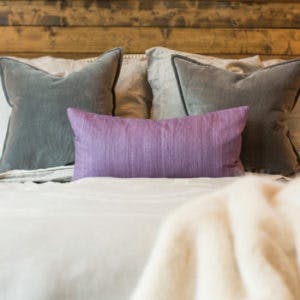 To make up for the lack of closet space in the first-floor master suite, they were able to take some square footage from the adjacent great room. “The original closet was a major challenge. It was really tight, like a bowling alley, and she and her husband were rubbing elbows if they were both in there at the same time,” says Curtis. “Removing the built-in from the great room was the best decision. We lost a couple of feet in there, but it had the flexibility for them to get a bigger closet and not squash each other.”

Another consideration was maintaining continuity with the rest of the home by merging the new floors with the existing ones. “The wood species had to be just right and not look like an add-on,” says the designer about the decision to go with hickory floors.

Perhaps it’s what you don’t see in the tranquil environment that matters most. “We didn’t stuff the room full. It’s breathable,” says Curtis. “A few well-chosen pieces leave enough space to maneuver around. This way you enjoy them more because they’re intentional things that are special and give you the flexibility to layer.” This was the case for the artwork she selected that is suited to her clients’ tastes and the space, like a large abstract that wasn’t overly bold. When it came to lighting, the designer wanted to deliver a special feature. “Something as simple as lights hanging directly over the nightstands gives that bespoke look,” she says. “With the clear-glass pendants, it’s not overwhelming. It’s really interesting.” 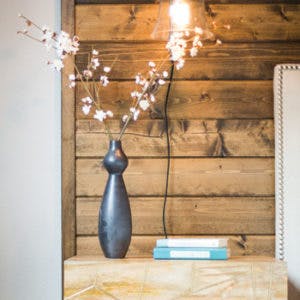 Overall, there’s a fine balance among the design elements that doesn’t take away from the main focal point of the wood accent wall. “They complement each other,” she says. “We mixed the rustic farmhouse and transitional. When you mix it together, it really pulls together the look that’s beautiful.”

In the end, this well-blended master bedroom could win anyone over. “We didn’t want something that would be overly masculine or feminine,” says Curtis. “Any person can walk in and feel comfortable.”

Go Your Own Way

Curtis likes to blend a variety of elements to finish a master suite and she encourages others to do the same. “Pick a dresser that doesn’t match the nightstand or add a chair that’s rustic,” she says. “When you turn to big-box retailers for a bedroom set, the room falls very flat. Mix with different styles instead to create interesting looks.”

For subtle contrast, try wood against wood like the nightstands that are attached to the accent wall in this featured design. The larger rug in this bedroom is worth the extra expense, says Curtis, because a smaller style would make the entire space appear smaller.

Though Curtis likes chandeliers in the bedroom, function comes first. In this bedroom, the homeowners wanted a ceiling fan. Today’s fabulous designs make this practical feature more aesthetically pleasing than it once was.